My neighbor came over banging on our door asking for me to read the 30 day notice to purchase flood insurance to cover the Programs costs or be deemed ineligible for HUD CDBG-DR Grants. This comes weeks and months after grants were awarded and signed. 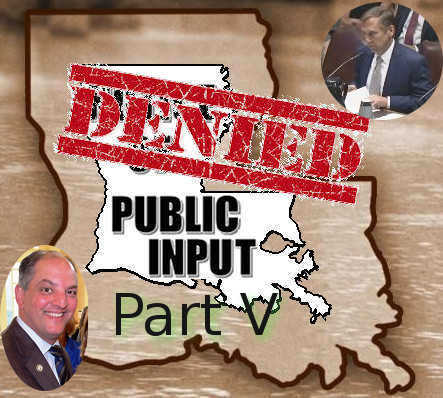 I wanted to promptly reply to your recent blog post and once again request, as we have offered in the past, to meet with you to discuss your comments and concerns as they relate to the Restore Louisiana Homeowner Assistance Program. It appears we both have the same intentions in mind to provide funds to eligible homeowners so they can recover from the devastating floods of 2016.

And while I trust that you are trying to be helpful to those who read your posts and follow you on social media, in fact you are often providing completely incorrect information and statements not based in current law or policy, which is only creating unnecessary panic and frustration among flood victims.

We certainly recognize and agree that these programs can be incredibly complicated and frustrating and also that there is always room for us to improve and streamline our processes to better help people recover from the flood.

We would like to work with you to help you better understand the issues on which you're commenting and hope to hear from you soon.

The OCD-DRU director Patrick Forbes did not respond to posts about the state giving only 30 days to low and moderate income families that had purchased FEMA NFIP Group flood insurance. The state gave flood victims from low income to retirees 30 days to provide proof of NFIP coverage to match program costs. This was the same as telling a low income fixed income retiree to come up with $250 or more to purchase a new NFIP Insurance policy. Sorry Mr. Forbes, this isn't something fixed income households can do without adding serious financial stress on the household. And to demand it the first 2 weeks of December may have been just a little insensitive, unless you were worried about your 4th quarter reports to HUD and the mistakes your Program hires made.

Slipped under the radar! This one line policy change in the Restore Louisiana Homeowner Program Manual version 4.0 was within the scope of work by the Program, but was it timed to correct the states HUD 4th quarter final reports or was it an attempt to reduce the number of active applicants and leave homeowners in a difficult spot just before the holidays?

The Program did not send a notice out which would have alerted many homeowners of the updated and new insurance requirements. Instead, the state OCD-DRU waited 30 days then sent out final notice letters to homeowners citing the policy line change of Oct. 5, 2018 version 4.0. The method the state used to communicate this notice of change was received as being cruel to the unsuspecting homeowners.

A copy of the notice sent to flood victims giving them 30 days to purchase the correct amount of Flood Insurance or be deemed ineligible for the Program is linked here.

Many homeowners were unaware of the HUD policy regarding flood insurance, and the state's documents did not convey the information clearly in the flyer version 3.1. This policy required homeowners to carry the coverage of the full grant amount and program costs at the time the applicant signed for the grant award. Many were told at signing that their FEMA insurance was enough to get them started.

For one of our neighbors, their FEMA flood insurance policy only covered $30,000 of the $40,000 grant they signed months ago. Our neighbor had so far only received $100 of the total $40,000 grant and was told to increase flood insurance or been deemed ineligible. The homeowner, given such short notice, had to borrow the funds from a family member to purchase a new flood policy. The documents sent to homeowner's implied that they could simply add additional coverage to their FEMA Group policy, but this was found to be 100% incorrect, and the flyer sent out to homeowners was not updated with the correct information.

Modified Section 5(a) by adding the following line:
"The full insurable value of the structure will be based upon the Program's final total project cost for the applicant."

The Program (Restore) didn't make it clear to homeowners that they were required to have the full grant award covered (which is the full program costs insured) before they signed the grant closing documents. But, the state OCD-DRU made it very clear that this mistake of not informing homeowners was going to be cleared up by the homeowner within 30 days of the date on the letter or be "deemed ineligible" for program grants.

The state could have made the announcement via the programs hired Media and Outreach people from Emergent Method LLC, Nick Speyrer and Alyson Gaharan. The state could have used the Program's official Facebook.com RestoreLA_Gov to inform the select few individuals that actually follow the Program online. The hired sub-contractor Emergent Method LLC could have reached out to me, and I would have announced the updated insurance requirement as soon as it was published Oct. 5, 2018. We do have a group of more than 500 members that are very active with sharing information and announcements. Without proper notice to the public and to the homeowners about changes made to the Restore Louisiana Homeowners Assistance Manual, the state is creating an environment that could cause homeowners to fail in their recovery efforts.

Ongoing Research "The States Responsibility to Communicate HUD Policy and Requirements to Citizens" will continue in our Research Section. The states OCD-DRU has created a disaster scenario that could lead to homeowners being denied any and all future federal relief.