EIDL Advance is to make payments to covered entities that have not received the full amounts to which the covered entities are entitled under section 331 of the Economic Aid to Hard-Hit Small Businesses, Nonprofits, and Venues Act. 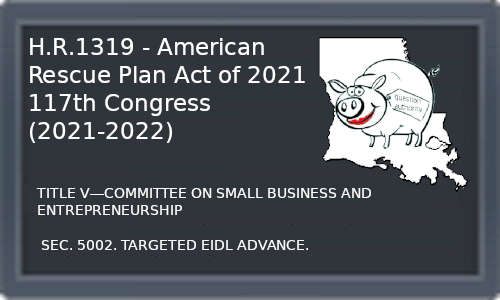 I'll be sharing information that may actually help you understand better why you may not be eligible for the targeted EIDL advance. But first, let's review quickly the changes to the EIDL Advance Grant from the CARES Act Section 1110(e).

From the: American Rescue Plan Act of 2021

(2) the terms "covered entity" and "economic loss" have the meanings given the terms in section 331(a) of the Economic Aid to Hard-Hit Small Businesses, Nonprofits, and Venues Act (title III of division N of Public Law 116-260).

(b) Appropriations. - In addition to amounts otherwise available, there is appropriated to the Administrator for fiscal year 2021, out of any money in the Treasury not otherwise appropriated, $15,000,000,000 -

(1) to remain available until expended and

(2) of which, the Administrator shall use -

(A) $10,000,000,000 to make payments to covered entities that have not received the full amounts to which the covered entities are entitled under section 331 of the Economic Aid to Hard-Hit Small Businesses, Nonprofits, and Venues Act (title III of division N of Public Law 116-260) and

(i) made to a covered entity that -

(II) employs not more than 10 employees

(iii) with respect to the covered entity to which the payment is made, in addition to any payment made to the covered entity under section 1110(e) of the CARES Act (15 U.S.C. 9009(e)) or section 331 of the Economic Aid to Hard-Hit Small Businesses, Nonprofits, and Venues Act (title III of division N of Public Law 116-260).

Editors Note: Many will not see any additional funds because of 2020 eligibility issues. Your business also may have been flagged by any number of agencies to include banks and clearinghouses.

Sometimes when instructions are not written clear and in plain language we may make mistakes when we try to interpret the instructions.

Some common mistakes made by small business owners in processing EIDL Advance Grants are:

I have many other examples of how a business could have been flagged for not understanding that when you asked for the advance grant you were to ask for $1,000 per employee or if self-employed you were to ask for 1 or 0 noting that you are an independent contractor and they would have counted you as one person. When those who will remain nameless applied for $10,000 in grants but couldn't provide proof they had 9 employees were being cut off you couldn't simply reapply claiming $1,000 after you attempted fraud for $9,000. The SBA was notified by other federal agencies to not process your application after these failed attempts. I believe it was more than 30 days after the first application was processed in April 2020 that the SBA started to see patterns and stop processing EIDL Advance Grants that appeared to be incorrectly filed.

About 1.4 million possible fraud cases were sent to the SBA OIG and OIG. These agencies still have many of these cases still open. More than half were suspected to be related to identify theft and the remaining 550,000 were classified as potentially fraudulent activity.