SBA Disaster Loans are marketed like no conventional lender could ever market a loan.

The SBA has more money than any conventional lender to do marketing after a disaster. The SBA can by omission of fact mislead homeowners down the path of serious debt burden and even loan default. 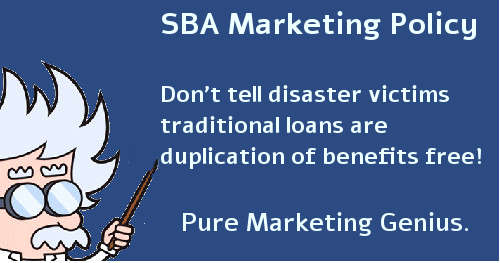 There marketing campaign was intense. You didn't stand a chance on your own.
You were standing their looking at the sign, you were told they could help.
You had disaster victim PTSD no matter how calm you thought you were.
You were told it would be Ok.
It wasn't Ok, you were not given the full story of what could happen and still today the SBA is not telling the truth to disaster victims and their families.

In Louisiana it's called the "SBA Fix" the word of choice, like a drug that brings us back to a better day and a sweeter life.
We just don't want to tell ourselves, our families, our friends that we fell for a federal disaster assistance scam.
Our elected officials didn't read the documents, they just repeated the words on the cover of the brochure that promised us a successful disaster recovery with very low interest.
We weren't told by our task force, the governor, the news media about the possible greener paths that would become available to us down the disaster recovery path.
We plan Disaster Sheep, thousands of us, lined up, signed up and for some, paying for the rest of their natural lives and passing the debt to their children here in Louisiana.

You didn't stand a chance, the media was marketing against you. It's only profits, we can't come out and tell you that you could save your family 10's of thousands of dollars if you wait 10 months.
We were paid to advertise, millions of post disaster federal advertisement money was given to local media outlets so why would they say anything to warn you of the SBA Debt burden you are about to did place on your family.

Louisiana Debt Burden Families left to fend for themselves and SBA Fix details and planning are not being released to the public.

$89.7 million for residents to help rebuild and recover from this disaster.
NOTE: All without informing the people that the SBA Federal Assistance would be counted against them even for signing the paperwork.

My case and my point is those that were warned and secured conventional loans have been reimbursed for all their estimated repairs by HUD Grants without any restrictions such as HUD often does but can be waived the the Grantee (State) managing the money. Louisiana Waived any road blocks for those in our out of a flood zone, all income ranges, with or without insurance, which technically allowed any area homeowner at any income level to be paid by the Grantee 100% of what the Grantee determined the damage estimates to be.
Is it unfair? No, it's because some people knew what to expect and some people had better channels of communications.
If you have read the post about the Task Force and the Executive Order regarding Public Input you would know that the State Grantee, the Governor of the state and the Departments within the state to include all members of special boards and commissions are not required to respond to you, talk to you, advise you or in any way offer you guidance.
But they are called your Louisiana Restore Task Force which is just a feel good name because "Louisiana OCD-DRU Grantee appointed special interest leaders" would just be too long to print on a logo.

Louisiana Task Force Meeting 2016
Ms. Elkins: "I just think that is what the committee needs to know for their jurisdictions, that if they have their homeowners go ahead and apply for SBA and SBA gives them a loan for $40,000 or $100,000, it becomes a DOB, a duplication of benefit, and they won't be eligible for CDBG funds and a lot of people don't understand that and they get angry when they trying to get assistance. Pat Forbes knows what I'm talking about. "

If we were only warned, if we only knew that our Disaster PTSD was real, if we only were read the warning, "Do not make financial decisions while on Medication" because we all drank the Trust Kool-Aid and it's killing us financially today.