HUD Grantee the State of Louisiana denied a retiree any reimbursement for rebuilding their home to city and parish codes regarding Base Flood Elevation months before the HUD Grantee LRHAP released policy and guidelines for reconstruction of flooded homes. 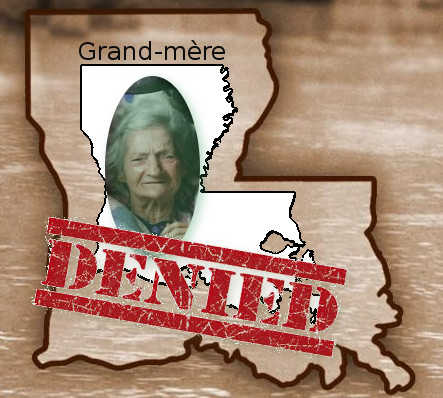 We have a homeowner that Reconstructed their flooded and demolished home.
The Homeowners Occupancy Permit was obtained March 2017.
The Restore Homeowners Assistance Program did not have guidance published prior to our members construction start date.
The homeowner used local city/parish zoning codes for first floor Base Flood Elevation height.
Our homeowner applied for Restore Homeowner Assistance when it first became available to homeowners in May of 2017, our homeowner was accepted June 2017 to the program.
The homeowner received a total of 3 grant awards each time increasing as mistakes were identified.
Our member and homeowner of a reconstruction project was to receive 50% of the total cost of reconstruction of the new home.
July 2018 our state denied the homeowners reimbursement because the homeowner did not follow HUD CDBG-DR Program guidance for elevation that requires Base Flood Elevation plus 2 feet above that.
Our homeowner according to Restore Louisiana Homeowners Assistance is 2 feet below what HUD requires to be paid reimbursement.
The homeowner was unaware of this policy at the time of the reconstruction. The homeowner meets all HUD qualifications for LMI, Age, etc.
We have not heard of that many people with homes that were condemned and/or had been substantially damaged by the flood and were forced to reconstruct by city and parish zoning departments and FEMA.
Gov. Edwards granted an increase for reimbursement from 50% to 100% July 13, 2018 which would be taking just over $600 million to cover. Based on the last Grant Award our homeowner received they would have been in that $600 million.
They were denied the reimbursement the same week the reimbursement amount went up from 50% to 100%.
What do you think?
A letter to the governor? (That's like sending a note to Santa)
Congressman Graves? (for more than a week I can't post again to his Facebook)
How about HUD and FEMA, it's FEMA guidance that our homeowner followed and it's HUD guidance that is different from FEMA.
Actually the HUD guidance comes from their policy to not offer loans in Special Flood Hazard Area (SFHA). You can't get a VA or FHA loan in our neighborhood and for the most part all of Livingston Parish from HUD due to their policy. In this same policy they talk about new construction has to be BFE + 2 feet if HUD funds are going to be used.
The questions for HUD from me will be, "Why are you offering any money to those living in Special Flood Hazard Area for any reason if your policy is not to grant funds to homeowners 2 feet below BFE? I sort of know the answer, it's in our allocations, the state may determine if a homeowner receives funding for reconstruction based on the states determination of need.
Can we argue the need when the homeowner used their retirement savings to rebuild?
My argument my not be well liked, but if a homeowner that drew an SBA Loan has more people fighting for their money to be reimbursed by HUD than a Retiree that used their savings to rebuild, well I'd think I'm living in the wrong state.
What do you think?
Contribute