In Louisiana a married couple of 22 years lost their grant when the husband died post-disaster and the widow was not listed as homeowner at the time of the disaster. Louisiana Law allows inheritance to be handled as a gift and not community property. 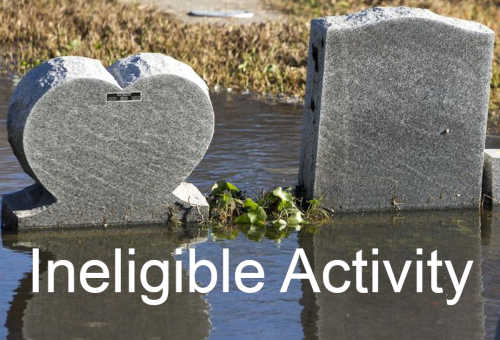 For ongoing investigation and privacy reasons we have changed the name of the disaster victim.

When disaster hit Mr. and Mrs. John and Jane Doe in the great state of Louisiana, HUD CDBG-DR grants were available, and the couple of 22 years was approved for $25,000 in Federal dollars to assist them in repairs of their family home.

John Doe received the home as a gift from his father 10 years before the 2016 disaster in Louisiana. The home was titled in his name. The Doe's were married in 1995 and have lived as a married couple in the state of Louisiana for 22 years.

After the Historical 2016 Floods in Louisiana Mr. Doe filed all the paperwork for disaster recovery. The State of Louisiana Restore Louisiana Homeowners Program approved the couple and listed their grant award in the name of "John Doe".

After the grant was awarded, Mr. Doe was hospitalized and not expected to live. Mr. Doe signed the marital home over to Mrs. Doe, witnessed by all his family and children. Mr. Doe died shortly thereafter.

Several months later Mrs. Doe needed to change the grant award into her name and was assisted by the state Restore Louisiana Homeowners Program (OCD-DRU) with the name change. After the grant name was changed, a routine audit of her account found that her name was not on the title of the home at the time of the flood, and her grant was then terminated. Mrs. Jane Doe was then determined ineligible because she could not provide proof of ownership of the home at the time of the disaster.

The Governor's Office was informed of the issue as well as the Governor's OCD-DRU disaster team. No response has been given as of this posting date.

Our 2016 disaster widow may not be alone. The state of Louisiana has the option to refuse a claim of ownership of a home because of the method of inheritance. If the home was titled in both of their names, John and Jane Doe, there would be no issue that Mrs. Doe was part owner of the home at the time of the disaster.

Will HUD inform the state of Louisiana OCD-DRU that HUD recognizes common partner and community property laws, or will HUD allow the state to terminate approved grants post-disaster if a spouse dies and property is not listed as common property?

UPDATE: 12-11-2019 Our Widow has been allowed access to the HUD CDBG-DR Program managed by the state of Louisiana Restore Homeowners Program. Mrs. Doe is eligible once again and according to the state she is in the system and being processed at this time. We will update once again when the grant award is presented and accepted by Mrs. Doe. Thank you all for your kind support in resolving this issue.