It was announced today, 9-22-2018 that the SBA Fix is in! Yes, finally, those that took the SBA Disaster Loan program federal assistance funds can finally not have their loan calculated as a duplication of benefits once the Governor asks the US President. 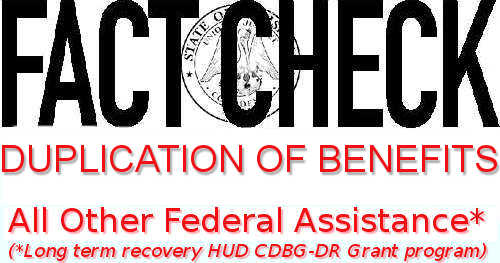 The Stafford Act provides checks to assure that no one federal agency offers federal assistance for the same services. Services is also known as Benefits in the phrase "Duplication of Benefits" or "Duplication of Services"
The main federal assistance example is the one many remember as the Katrina era HUD CDBG-DR grants used to pay off or pay down homeowners SBA Disaster Loans in very large amount totaling an estimated $942 million of taxpayer money used to pay off SBA Loans that was using private sector lenders and banks for these loans.
Since that date HUD has reviewed nearly every path to which states that have had declared disasters in have tried to use HUD CDBG-DR to pay off SBA Loans.
Nov. 16, 2011 HUD released Guidance for all Grantee's managing CDBG funds and CDBG-DR funding.
The word was no, you are not allowed to use HUD funds to pay off SBA loans.
The issue was approached by a massive congressional representative force representing Super Storm Sandy victims with the same outcome. HUD did not allow CDBG-DR funds to be distributed to homeowners with SBA Loans. They did actually pass the RISE Act that allowed homeowners to max out their SBA Loans to qualify for limited HUD funds and state issued grants as part of the IA FEMA PA grant programs.

In Louisiana we have been working with a Task Force and Congressional Representatives that were all warned during the weeks following the flood that the Katrina era of SBA Loans being paid off were over by former state directors. The warning fell on deaf ears and over nearly 15,000 homeowners applied and accepted the SBA loans to which many still thought HUD would pay them off. This was one of the worse communication breakdowns from our state officials responsible for disaster recovery. It is well documented in the Sept. 2016 meeting minutes.
Since that date, the dates between August and December 2016 where our task force actually asked SBA to extend it's registration time because thousands of Louisiana homeowners wanted to apply for the SBA Loans. This was documented by Mr. Durbin Sept. 2016 in his letter to FEMA asking that the FEMA and SBA deadlines be extended by 30 days.
This again was a complete failure when you review all the time and effort to "Undo" what was "Done". The internal struggle to point fingers and to ignore other issues citing they are all related to the SBA Loan Fix issue. So many other creative grant opportunities would passed over for one Fix it All policy change that has yet to produce meeting announcements with the federal agencies that will be passing their rulings. Not a single state representative approached FEMA, SBA, HUD collectively looking for a solution or a "Fix" it's all about modifying the Stafford Act by adding more words when the words are very clear that are in print today. Federal Assistance, Federal Services can not be duplicated. Federal Grants can not be used to pay off SBA Loans. Federal Loans are loans that are Federally Secured.

Remedy - Opinion - Editorial links will be published here.
At this point it appears our first action may actually be to ask people to resign from the disaster recovery programs they currently hold a place in. If from notes published Sept. 2016 no changes have been made to secure our long term recovery efforts that part of the program need to be replace with others that can get the job done.

"(A)IN GENERAL.- The President may waive the general prohibition provided in sub-section (a) upon request of a Governor on behalf of the State or on behalf of a person, business concern, or any other entity suffering losses as a result of a major disaster or emergency, if the President finds such waiver is in the public interest and will not result in waste, fraud, or abuse. In making this decision, the President may consider the following:

"(i) The recommendations of the Administrator of the Federal Emergency Management Agency made in consultation with the Federal agency or agencies administering the duplicative program.

"(ii) If a waiver is granted, the assistance to be funded is cost effective.

"(iv) Other matters of public policy considered appropriate by the President

"(B) GRANT OR DENIAL OF WAIVER.- A request under subparagraph (A) shall be granted or denied not later than 45 days after submission of such request.

"(C) PROHIBITION ON DETERMINATION THAT LOAN IS A DUPLICATION.- Notwithstanding subsection (c), in carrying out subparagraph (A), the President may not determine that a loan is a duplication of assistance, provided that all Federal assistance is used toward a loss suffered as a result of the major disaster or emergency.".

(A) IN GENERAL.- Not later than 1 year after the date of enactment of this Act, the Administrator, in coordination with other relevant Federal agencies, shall submit to the congressional committees of jurisdiction a report conducted by all relevant Federal agencies to improve the comprehensive delivery of disaster assistance to individuals following a major disaster or emergency declaration under the Robert T. Stafford Disaster Relief and Emergency Assistance Act.

(B) CONTENTS.- The report required under subparagraph (A) shall include both administrative actions taken, or planned to be taken, by the agencies as well as legislative proposals, where appropriate, of the following:

(i) Efforts to improve coordination between the Agency and other relevant Federal agencies when delivering disaster assistance to individuals.
(ii) Clarify the sequence of delivery of disaster assistance to individuals from the Agency, and other relevant Federal agencies.
(iii) Clarify the interpretation and implementation of section 302 of the Robert T. Stafford Disaster Relief and Emergency Assistance Act (42 U.S.C. 5143) when providing disaster assistance to individuals, including providing a common interpretation across the Agency, and other relevant Federal agencies, of the definitions and requirements under such section 302.
(iv) Increase the effectiveness of communication to applicants for assistance programs for individuals after a disaster declaration, including the breadth of programs available and the potential impacts of utilizing one program versus another.

(C) REPORT UPDATE.- Not later than 4 years after the date of enactment of this subsection, the Administrator, in coordination with other relevant Federal agencies, shall submit to the congressional committees of jurisdiction an update to the report required under subparagraph (A).

As you are aware, the floods of 2016 devastated South Louisiana. More than 113,000 homes were damaged or destroyed and many families had their lives turned upside down. As I have stated to you in the past, the federal Duplication of Benefits (DOB) penalty is one of our greatest problem areas as we continue to recover.

The Bipartisan Budget Ac of 2018, which President Trump signed into law on February 9, 2018, includes language related to Small Business Administration (SBA) loans to homeowners as a duplication of other federal assistance. By inclusion of the language, Congress clearly intended to modify the current approach of federal agencies, including HUD, of counting all approved SBA loan amounts as a duplication of benefits against homeowners impacted by disasters.

Many impacted homeowners who applied for SBA loans, at FEMA’s insistence, and were approved, decied that drawing the full approved amounts of the loans would be unaffordable. Subsequently, these homeowners either did not draw any of the funds or drew only what they thought they could handle financially. They have now found themselves unable to access Community Development Block Grant (CDBG) funding to complete their rebuilding due to HUD’s interpretation of the DOB rules. Congress’ intent was clearly to allow these homeowners the ability to access additional assistance by making only those funds they have drawn count as a DOB.

It is critically important that HUD correctly interprets Congress' intent in this law and allows your grantees to offer grants to these homeowners for their remaining unmet rebuilding needs, ignoring SBA loan amounts that they never drew down. As we continue to rebuild from the floods, this remains the single greatest complaint for homeowners. Therefore, I am respectfully requesting guidance from your agency regarding your interpretation of this new law and how you intend to implement it. This information will allow us to assist the more than 5,200 homeowners currently facing the DOB penalty.