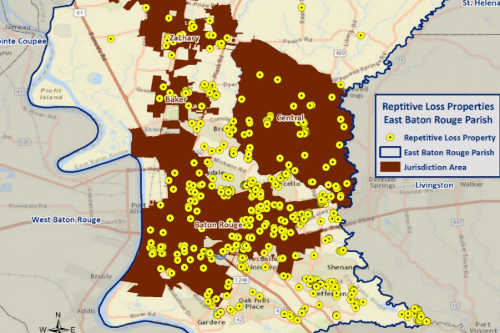 It was 1953, DR-3, Floods in Louisiana, study shows water runs toward the gulf. Then in the 70s, 80s, water still flows the same direction with ponding along the way. In 1991, engineers hired to study how to dig a ditch 12 miles long asked for more money

I'm sure you all have read the story about the $11.25 million grant that is to fund the $15 million Design and Study of water flow in EBR by now.

The EBR Emergency Management Team has been working on a plan started in the 50's, revamped in the 70's, addressed again about 84, then skipped to 1991, then started again in 2011 and pushed up the study in 2016 with the following information.

"Probability of Future Hazard Events
The probability of a hazard event occurring in East Baton Rouge Parish is estimated in the table on the following page. The percent chance of an event happening during any given year was calculated by posting past events and dividing by the time period."

My comment: "Is this the standard formula our science, design and planning projects produce? I want our kids to take this to the next level and make K-12 competitions for the $15 million on developing storm pattern predictions based on science of climate changes (not related to global warming Al Gore Fans) . Maybe we can make this a STEM project for the kids that soon will be homeowners that have to deal with the disasters as we have. Give this project today to a high school to complete before graduation which is the same expected completion date for this round of design and planning.

That would make it, Study continues in 2016 then upgraded in 2019 with design completion date of 2022 but only if the remaining costs are covered by other grant funds. We are still $3.75 million short. But wait a minute. The Restore Louisiana Homeowners Planning Program forfeited $3.2 and $6.8 million to a project that was labeled as "Watershed Design and Planning" and was told to us all to help "Kickstart" the 2019 design and planning project that is estimated to be completed in 2022.

Would you all write to Congressman Graves and have him update this post I linked below so he can correct his post. According to all public records, we the disaster victims of the 2016 floods have allowed the state to transfer the money away from homeowners recovery and into the pockets of designers and planners.

I'll go one step further and offer an email from EBR rigging the awards to one Not for Profit that just happens to be located in EBR.

In short, Comite planning for EBR started in 1991 cost over $11 million for technically nothing.
Comite funded by HUD Public Law 115-123 Feb. 9th 2018 but funding is not available so the state started signing contracts before the money was allocated. This forced them to ask FEMA for some of the money FEMA gave for statewide disaster mitigation which might have paid for your homes elevation.

Let's see, then the state told the RLHP task force it needed to take $10 million and give it to The Water Institute of the Gulf which was recommended by EBR Chamber President who also asked that the bid requirements match only the services that TWIG offers. (Email Linked) We also found that The Water Institute needed the $10 million spread out over 3 years.... Kind of matches what Graves said.

So it's $15 million from FEMA, $3.8 million from all of you that got nothing from HUD. Next EBR will announce Job Growth and Economic Growth but will produce ZERO projects typically associated with mitigation. You know, Levees, Drainage ditches, pumping stations, etc.

Once again, the state of Louisiana cycles the Planning stages with the same people that just a year ago argued that we have had enough planning.

2008 Honda CRV AC shuts off after about 20 minutes in traffic or when idling. Temps for engine are all within...

2008 Honda CRV AC shuts off after about 20 minutes in traffic or when idling. Temps for engine are all within...